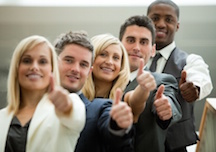 There really IS a right way and a wrong way to give feedback.

What’s the difference between a successful and happy team or family and an unsuccessful one? According to one Harvard research study, it’s compliments – or specifically – the ratio between positive versus negative comments. Their study showed that successful teams achieved a ratio of 5.6-to-1 or 6 positive comments for every critical one. By contrast, medium performing teams came in at just under 2-to-1 while low performing teams had a depressing and somewhat predictable rate of 3 negative communications for every encouraging word. Let’s look at each team and understand the recipe that created those results.

The Irony of High Performance

At first glance, a naysayer might suggest that a ratio of 6-to-1 might sound like a bunch of cheerful idiots with low standards self-congratulating themselves all day long – but ironically, that would actually explain why low-performing groups are full of naysayers. That’s because people who see the world through a prism of negativity can’t help but produce even more negativity. The truth is: where focus goes; energy FLOWS. Groups with high standards who strive for excellence know that focusing on what’s great, working within your strengths and pursuing the magic of “flow” is the recipe for success. Flow is what happens when one is so immersed in their own personal genius that time disappears and great things “magically” happen.  This positivity principle isn’t just about corporate or sporting teams either. Focusing on what’s great – while giving fair, honest and well-intentioned feedback aimed at improvement – also works in intimate, personal and family relationships as well. In fact, it’s invaluable in creating high performers in any pursuit.

The Surprise of Mediocrity

If you look again at those ratios I quoted from the Harvard study, you’ll notice something that’s a little bit surprising about mid-level performers also. They are literally averaging “twice as nice” when it comes to 2 positives for every critique. Now, on its own, that sounds quite admirable or effective – but research shows its not enough. THAT’S literally the 2-millimeter difference that Tony Robbins talks about when he explains what it takes to go from excellence to outstanding. It’s the difference between “adopting” an encouraging 2-to-1 mindset and OWNING a 6-to-1 standard.

The corrosive effects of negativity

Just as positivity has the power to permeate a culture and turn it into a high performance breeding ground, negativity has a pervasive power all of its own. Its toxic effects tend to wear away at the very fiber of a team and leave its members jaded, jealous, resentful and anxious about anything that feels even remotely “risky.” Think about it: in a snarky, back-biting or critical environment, who has a taste for thinking outside the box or vulnerably putting forth an idea that could be a blockbuster…but will almost certainly be attacked or judged?

The best question ever

If ever a question had the power to change the results you get in your life and that of others, it’s this: “what’s great about this?” The reason this question is so incredibly powerful is because it comes embedded with a powerful presupposition before it’s even considered. Simply put, by just asking that simple question, your mind will be directed to answer it based on the assumption and belief that there ALREADY IS something great about the given scenario. Plus it will embolden people to consider and look for positive benefits to any situation. Too often, people lead themselves down the rabbit hole by asking terrible-quality questions like “why does this always happen to me?” As soon as you ask a question like that, your mind must assume it’s true in order to seek an answer.

Whether you want to build a high performing team/family or a dysfunctional one that routinely disappoints, it all comes down to communication. When you look for, encourage and reward excellence, you will have more of it. When you mismatch and focus on what’s wrong and what can’t work, you get more of that. When you think about it, that means underachievement is literally a “communicable dis-ease” that spreads from one individual to another by negativity and criticism.

For more details on the study: https://hbr.org/2013/03/the-ideal-praise-to-criticism/