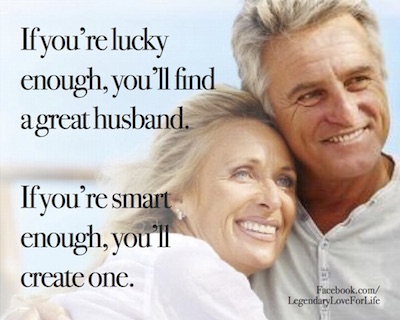 A lucky woman may find a great husband. A smart woman will create one.

I want to share a wonderful success story of how one woman transformed her marriage and her life. And her husband doesn’t even know she did it…but he likes it. A lot. That woman is one of my clients. She came to me struggling in every area of her life. Her business was stagnant and she was struggling with clients and revenue. She was in near-constant physical pain that turned out to be rooted in her emotions. She had a daughter nearing adolescence with serious health issues who was becoming increasingly moody and to to top it off, her husband was so tired of hearing her complaints that he couldn’t fix, he had just shut down and begun ignoring her incessant demands. She was very unhappy.

The best question ever

It was clear that my client wasn’t getting the results she wanted. However, it wasn’t nearly as clear to her how she she was actually contributing to the problems. In fact, doing the same thing over and over while expecting a different result is the very definition of insanity. I was able to shift her focus away from the problems so we could actually influence what she wanted to experience instead and in the process, we asked a much better question…

“What was your role in that?”

To her credit, and with my help. she was willing to stop parking all her challenges at everyone else’s feet and examine how she contributed to their creation. She knew how frustrated she was and actually felt kind of bad about her perpetual bad mood. I helped her see how that was keeping her locked in a power struggle – especially with her husband – and he was clearly winning. That’s because in any power struggle, the person who cares the least also has the advantage. Her husband’s analytical nature made it easy for him to disconnect emotionally and just defiantly dig in his heels on whatever he wanted. The problem is it’s also a slippery slope and at some point, it becomes impossible to undo the damage.

So how did we turn it around?

When you finally ask a better question, you can actually come up with a better, more empowering answer. When you routinely ask yourself a question like “why is my husband such a jerk?” it doesn’t exactly set you up for effective problem-solving. Instead, it reinforces the pre-supposition about the husband’s behavior even deeper…despite the fact that it might actually be false, unfair or at least, one-sided. Once we stepped back and re-assessed where we were and what she ACTUALLY wanted to create, I was able to give her some much better tools and a new awareness that I watched take hold powerfully. Rather than seeing herself as a victim and aggressively attacking the actions of others when she disagreed, the new tools made her curious or fascinated when it came to understanding and even predicting human behavior. She REALLY started to GET IT and all of her interactions began to SHIFT…in response to her change.

One of my client’s biggest shifts occurred when she no longer saw her husband or anyone else she was giving her power to as an antagonist. She understood that when when she healed the unresolved wounds of prior disappointments and stopped EXPECTING people to disappoint her, she created room for new and better results. When she asked for help humbly and vulnerably, she was almost surprised how willingly people responded in new and different ways.

Communicate in Requests Rather Than Complaints

The second game-changer was in making requests for help that were compelling instead of veiled attacks on all the numerous “other” times when she’d been let down. Nobody wants to respond positively to a ‘request’ that begins with the words “I’ve asked you 5 times to _______.” In fact, she was actually surprised on a few occasions when her husband and others would be so compliant and willing to help. That’s because I helped her learn the real secret: offer up the value it would give you IN ADVANCE of the person doing what you asked. It’s really simple emotional math. When the value of being appreciated is greater than the energy expended on the task, it’s a no-brainer. In fact, now that I’ve helped her set up her husband to be her hero, she is frankly shocked at the transformation.

Today, my client’s world looks very different from when we first spoke. She is much happier and at peace and while her chronic pain has not disappeared, it has lessened dramatically. She has ‘shifted’ from struggling with no money coming in at all to getting all new contracts from existing clients. Plus we even helped her finally decide to walk away from one very challenging client and as soon as she informed him of her intent, the entire relationship ‘shifted’ to a much more productive one…with additional revenue…and a lot more respect and appreciation on the part of the client. By the way…one of the main – and most important – reasons she was able to resign that client…was because her husband who at one time had no interest in even talking about her business…had tired of seeing her stressed out by this client. He stepped up and told her to stop working for them because even though they separated their income, he would take care of them both. THAT was a huge breakthrough that reset the entire partnership and it continues today. Now this same man who’s been pre-occupied with his work for years because that’s where he felt most appreciated…has been coming home early and far more involved with both his wife and daughter. That’s a huge difference in a pretty short amount of time…and it’s still just beginning. It all just goes to show what’s possible when you bring new strategies to old struggles.