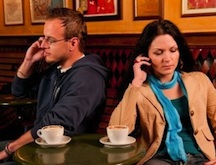 If you choose not to decide, you still have made a choice…yet another way we self-sabotage

One of the things I love most about being a featured blogger on popular web communities like The Daily Love is the interaction I have with readers. I got a call recently from a woman who had read my blog about self-sabotaging and while telling me her story, she said something that stopped me in my tracks. She said she’s been online dating since 2002 and she averages about 2 dates per week but she’s only found a few guys she liked enough to have relationships with and those all fizzled out pretty quickly. Aside from the obvious long-term challenges, as she continued to talk, I had to stop to do the math. Two dates per week…that’s 104 dates per year…multiply by TEN YEARS…that means this woman has had 1040 dates – and very little to show for it!

Where do I start…?

There are so many issues here. Like a ball of yarn that seems hopelessly tangled, it’s going to take some time to straighten this out. First of all, I’m so glad she called because she’s a perfectly nice woman who deserves far better than she’s getting. Unfortunately, without some kind of intervention, this pattern is not likely to change. It’s very clear that she has had some habits, beliefs and strategies that are not working for her.

If you’ve actively dated for any period of time, you probably know it requires a huge commitment of time and energy. Based on my caller’s results, it’s clear to see she was expending a lot of energy…but you could hardly say she was being fulfilled or gaining energy back in the process. That can’t work long term.

Focusing only on what’s wrong

We all process the world by metaprogram filters that causes us to primarily either “move toward” what we want or “move away” from what we don’t. Oftentimes, “moving away” types like my caller get really good at finding anything that might be wrong or missing. Not only is that totally self-defeating…it’s REALLY unattractive to a potential partner.

Clarity on what you want

It’s obvious that this woman is not very clear about what exactly she’s looking for in a man so once again, she is wasting time and energy. It’s like closing your eyes, throwing a dart and hoping you hit something good; that doesn’t work in darts or dating. She also said that oftentimes, she decides within minutes of meeting a guy that he is not for her and then she’s counting the minutes until she can figure out how to get away. In my coaching program, I use a process to help my clients get crystal clear on what they want, don’t want – and won’t tolerate.

Even if you know what you THINK you want…sometimes you have to be smart enough to step back and over-ride some choices. If your primary criteria is looks rather than character, who bears some responsibility for that choice when Mister Handsome cheats on you?

Addicted to the chase

For some people, the process of dating is way more fun and easy than the hard work of actually relating. You can burn through dates all you want but if it’s just becoming a monotonous rotation of forgettable faces and boring small talk, you have to step back and re-evaluate. What is your dating purpose and what exactly do you bring to the table anyway? If you don’t know your value and communicate it clearly, chances are, you’re wasting everybody’s time.

Lastly, the worst kept secret here is if you haven’t found much of anything you like in more than 1,000 dates, it could very well be possible that fear of commitment or fear of rejection may be at work here. It’s a lot less painful to reject other people first rather than take the risk of being vulnerable and open.

After a few conversations, my caller gave me permission to anonymously share her story because she knew it may also serve others who were facing similar issues. Simply put, any one of these issues was enough to spoil any shot she had at love before it even had a chance. I haven’t even outlined them all due to the length but I think you get the picture.

If you think you may be self-sabotaging your chance at love, feel free to contact me via email to set up a free consultation. I believe we all deserve the transformative power that love brings and it’s sad how many people I see who unknowingly block that from coming into their lives every single day. The truth is it’s hard to remove blocks you don’t yet see so that’s why I make this offer while I am able. Simply put, I believe we all need a little Daily Love in our lives…and I’m always honored when I can serve others in having it.