“Your playing small does not serve the world…”

What Sets You Free Will Also Keep You Together.

Who said marriage was about living “happily ever after?”

“Your playing small does not serve the world…” 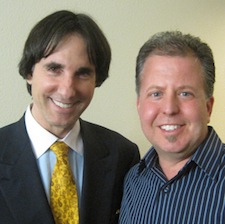 (Photo caption: Me with John Demartini, a living master of Quantum Physics who appeared in the film, "The Secret.")

(Photo caption: Me with John Demartini, a living master of Quantum Physics who appeared in the film, “The Secret.”)

Why it pays to step up, step out and be the change you wish to see

Today’s blog is just a little different from my typical posts however I write it with my usual outcome in mind. Simply put, “how can I help my readers bring out their very best in their relationships – and in life?”

If you recognize my headline above, it’s because it comes directly from my favorite quote of all time which although it has been frequently mis-attributed online to the great Nelson Mandela, was actually written by best-selling author, Marianne Williamson. The full quote has been published on my FaceBook page since day one because it has inspired me and fully resonates in my soul. I share it today because I have some exciting personal and professional news…and my hope is that it might just inspire you, too. But first, here’s the quote:

“Our deepest fear is not that we are inadequate. Our deepest fear is that we are powerful beyond measure. It is our light, not our darkness that most frightens us. We ask ourselves, Who am I to be brilliant, gorgeous, talented, fabulous? Actually, who are you not to be? You are a child of God. Your playing small does not serve the world. There is nothing enlightened about shrinking so that other people won’t feel insecure around you. We are all meant to shine, as children do. We were born to make manifest the glory of God that is within us. It’s not just in some of us; it’s in everyone. And as we let our own light shine, we unconsciously give other people permission to do the same. As we are liberated from our own fear, our presence automatically liberates others.”

by Marianne Williamson from A Return To Love: Reflections on the Principles of A Course in Miracles

The reason I find this quote so powerful and profound is because it is such a brilliant reminder that a healthy sense of self esteem and self love does not have to come at the expense of someone else. On the contrary, as you step into your own power and greatness, you now have the ability – and even the duty – to see it and call it out in others. I can’t think of a more powerful or much-needed gift than the ability to lovingly inspire other people to be at their very best simply by being who you were meant to be in your soul. As two people “liberate” one another, a profound healing takes place that replaces old wounds and scars with a new consciousness of love, forgiveness and peace.

So what’s the exciting news?

I’m glad you asked. This year, I will celebrate my 4th anniversary as a self-employed entrepreneur and when I made that leap (only a month and a half before a major stock market crash occurred…oops…), I thought often of Marianne’s powerful words about my “playing small does not serve the world.” At that point in time, I made a conscious decision that I would give up the comfort of a regular paycheck and relative anonymity in return for a chance to follow my passion and “serve the world” as a Relationship Coach. It meant that I embraced the raw vulnerability of owning my story  and “mistakes” publicly. It meant I was giving up a measure of my privacy as I stand on stage, appear on live television and write blogs seen by hundreds of thousands of people and give my all to make a difference for others. It also meant I was relying on my own ability to provide my living…so playing small was no longer an option.

“Take the first step in faith…

Speaking of great quotes, Martin Luther King, Jr. also said “Take the first step in faith…you don’t have to see the whole staircase, just take the first step.” Just a few years after I took that first step, I’m very pleased to announce that I’ve been asked to be Marianne Williamson’s personal point of contact when she comes to my area for a speaking engagement next month. Yes, that’s right, I’ll be directly serving the woman who helped inspire me to serve others on a much grander scale. That’s not all either. Since starting this journey, I’ve met and interacted one-on-one with some of the top names in personal development who first inspired me from afar – people like my mentor, Tony Robbins, John Demartini (see the photo above) and Michael Beckwith from “The Secret,” among several others.

I don’t tell you this to impress you and it’s probably not even all that impressive to most people. It’s simply a measure of how far I’ve come in a relatively short time when I stepped out in faith. I simply want to impress upon you that when you get out of your comfort zone and allow yourself to be of service to something greater than you, there’s really no telling how far you’ll go or how fast. In other words, when you commit to playing on a bigger stage, you never know who may end up on the stage next to you…

What this means to you…

So since this isn’t really about me, I’m curious…where is an area in your life where YOU can step up and really commit to pushing yourself in the direction of a big & compelling dream? Who else could you serve and where would you create value for others? What if everything you ever wanted is sitting right there waiting for you…just beyond your old comfort zone? What would have to happen for you to take some action and go for it? Give it some thought, send me a note and let me know how I can support you…

If you’d like to join me and see Marianne present a half-day program, as only she can, please click on the link below to attend her only area appearance:

BE THE CHANGE NATIONAL CONFERENCE

The spheres of spirituality and social change have begun to merge, a la Mahatma Gandhi and Martin Luther King, Jr., as people we are taking more and more seriously the injunction that we must “be the change” we want to see happen in the world.  In this special workshop, Marianne Williamson explores the interface of personal and global transformation – a healing of the world from the inside out – and how every individual has a unique and important part to play in it.

Please look for me at the event and let the promoter know you heard about the event here. When you do, a portion of your payment will “be the change” in the form of a charitable contribution. Thanks!