“The Waverunner Principle: Never hit the brakes on love or forgiveness”

Take your relationship to the next level… NOW!

How To Cut Through The Fog Of Relationships?

“The Waverunner Principle: Never hit the brakes on love or forgiveness” 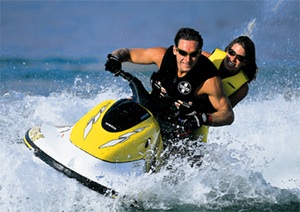 Just in time for summer –

I was talking with a brand new client when the topic of forgiveness kept coming up. As you might expect, it’s a rather common topic in relationship coaching. That’s when she said it…something to the effect of “I’m a very trusting woman but if you do me wrong even once – it’s over – no more love for you.” What struck me so profoundly was that this same woman had just expressed a beautiful compassion and forgiveness for a child who had caused a number of challenges…yet she had a totally different value when it came to her intimate partner. Interesting…

That’s when I asked her if she had ever been on a Waverunner personal watercraft. She said she had and offered up that it was fun. I went on to explain that when you first get taught how to ride one safely, the instructor always tells you…do not try to let go of the throttle and stop on water to avoid hitting something. That’s because momentum and inertia will carry you forward and crash you into the very object you hoped to avoid. That’s because you lose all ability to steer if you’re not moving forward. Instead, you have to use the throttle and give it gas to move the craft safely and quickly away from danger. It seems almost counter-intuitive – but that’s the way Waverunners work. Well, it’s also the way love and forgiveness work, too. When it’s hard, the first instinct is very often to take love away – and the safest thing you can do is love, forgive and move forward in the direction you want to go.

Now don’t get me wrong, I’m not saying you accept bad behavior and allow it to continue unchecked. Far from it. What I am saying…is that the smartest, healthiest and best thing you can do is to accept that people usually do the best they can with whatever they have available in the moment. It’s actually pretty rare when someone goes out of their way to hurt a partner…especially one who’s been loving and forgiving in the past. Sometimes your needs unfortunately get compromised by others who are just trying to meet their own needs. That’s truly unfortunate and it nearly always results in a learning experience. The thing is…at some point in life, you realize that forgiveness is, indeed, a gift you give yourself – and the only thing worse than being hurt – is holding onto a grudge. Then, like my client in question, you just might use that grudge as an excuse to go out and withhold grace from someone else who is quite special and may very well still deserve it. Then that cycle of hurt gets perpetuated and lives on to hurt others in return.

What if the greatest gift you could give yourself was the ability to be a giver of grace? You never know…someone like that just might attract their equal…an intimate partner who KNOWS just how special it really is to discover someone with a gift like that.