Is “The Big O” Making Or Breaking Your Relationship? 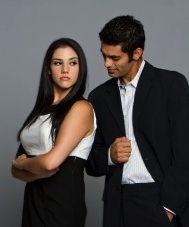 If you don’t like who you’ve become, it’s time to rediscover who you really ARE

I got a new client recently who came to me because she got a good look at her own behavior and she didn’t like what she saw AT ALL. It seems she met up with a man she’s known for some time and it’s very clear there’s a mutual attraction so they went out on a date. The great news is that the date went very, very well – but by the next day, she was shocked by how aloof she was acting toward him. She was even publicly resisting and walking away from him in front of their mutual friends afterwards. In fact, if someone didn’t know better…they’d get the impression that she didn’t like him at all!

Nothing could be further from the truth…

The fact is – she did like him – but her every reaction told a far different story. That’s exactly what freaked her out and made her realize she needed to get to the bottom of that. She didn’t want to be sending those signals but she felt almost powerless to stop it because she didn’t understand WHY she was even doing it.

Let’s shed some light on that

We immediately began to pull apart some of the issues that were affecting my client’s self-sabotaging behavior. The fact is, she had so many interlocking fears, limiting beliefs and outright misunderstandings that she was more bound-up than the world’s greatest escape artist…the only difference was – she had no idea how to get free and rescue herself.

I recently developed some really powerful and exciting new content that I’ve been teaching to my clients and I’ve gotten fantastic results and excellent feedback from everyone who’s learned and put the material into practice. I believe it’s a game-changer and because my client had so many inter-locking issues, I was able to show her the EIGHT different areas – out of only NINE – where she was sabotaging. Now that’s REALLY bound! I wonder how many of you may be able to relate?

In this new content, I teach my clients in just a few minutes the nine different questions every man MUST answer before he will commit and claim a woman he believes is worthy. In other words, I teach EXACTLY what makes the difference between “a keeper”…and one you keep away from…and it’s powerful. Bottom line, she had so many distortions, fears and misunderstandings about what men really want, she was building walls around herself and doing the exact things that made her look like one of the “keep away” girls.

When people know better, they do better

Armed with some brand new knowledge, the next step was applying it and changing her behavior. Along the way, we also uncovered some of the root issues that had caused my client to lower her self esteem after years of self-inflicted mistakes. Perhaps one of the biggest mistakes you can make when dating is to not know your value. After all, if you don’t know your value, how can you expect a prospective partner to see it? I’m not talking about being arrogant. I’m talking about simple, positive – and incredibly attractive – self-esteem.

Now that you know it – you’ve got to own it

In just a very short time, my client was armed with all she needed to go back to the guy she dated and pulled away from…and own the fact that she was not proud of her actions. Here’s the thing: we all make mistakes occasionally and do things that make us less than proud of how we behaved. However, there is really something attractive about a person who owns their mistakes, apologizes and offers a really reasonable explanation – which is not the same as an excuse. My client used her new-found clarity to admit she was not proud of her actions – and that she was committed to a whole new standard for the future. She even did what I call “drop a marker” and ask the guy to point it out if she ever reverted back to the old habits!

I haven’t talked to the guy in question – but as a man, I will tell you this: there is something VERY intriguing about a woman who steps up, owns her stuff, knows her value, and asks to be held accountable in the future. That’s called radical authenticity and it does not happen every day. Trust me. When you do that, you are immediately in a man’s head because you stand out from 90% of the other women who are competing for his attention. The great news is – once you get into a man’s head – that’s the first step to ending up in his heart! Once you captivate him, you’re well on the way to creating your own Legendary Love For Life!

If you’re curious about the Man Magnetics Formula™ or if you want to find out how you may be self-sabotaging your own relationships due to those blind spots I write about, feel free to reach out to me for a free intro while I still  have a little time. I can’t guarantee I will be able to accommodate everyone who requests a session, but I will try to help as my schedule allows. Simply put, I love what I do and it’s an honor to serve this community while helping to create even more love in a world that surely needs it more than ever.