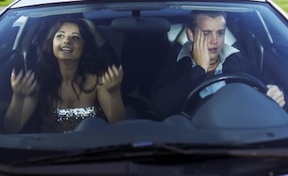 When you encounter aggravations on the road of life, sometimes you just have to make a quick turn-around….

Some of you may know that I just returned from a month-long visit to Australia with my fiance, Katrina. Now that I’m finally starting to recover from the 14-hour time difference and adjust to sleeping at night again, I wanted to announce my return and share an interesting story from our trip. Of course, I’m never just sharing stories…my purpose is always to share value that you can apply to your own life.

The Road of Life…Occasionally Hits Some Rough Patches

While we were in Australia, we covered a lot of ground and even took a road trip along the eastern coast from Sydney going north and back again. As you may imagine, an extended road trip in a compact car isn’t always going to go smoothly. Between the incredible amount of road work delays, traffic jams, challenging weather conditions, huge potholes, disappearing pavement, malfunctioning GPS units, kamikaze kangaroos, extended stretches between petrol stations and an itinerary with a lot of moving parts that required massive flexibility…I think you can see that parts of this trip didn’t really fit into the category of “dream getaway.” Then when you throw general fatigue, hunger and long days in cramped quarters into the mix, I think you get the picture.

Then Came This One Particular Evening…

That was a day when we did a particularly long trip from early in the morning to late at night…and it seemed like we encountered nearly everything on the list above in that single stretch. Then just to add to the fun, we were going through an area that was very dark and remote and these huge, flying insects were hitting the windshield with an auditory thud…which also left a visible splat of residue behind. After a while of this, Katrina said, “I don’t know how you can see to drive with all these bugs covering the windshield.” At that, I playfully and sarcastically said, “Honey, I don’t even see the bugs…all I see is that big, wide world of opportunity opening up in front of me.”

As soon as I said it, we both kind of laughed and the mood was immediately elevated. (We also knew immediately that it was going to end up in one of these newsletters). The technical definition for what I did (and I confess it was not entirely intentional in the moment) was a “Pattern Interrupt.” By using humor and a radical change of perspective, it totally shifted the conversation – and our state – to one that was a lot more positive after a very long day. Here’s what makes that even greater – after sharing a laugh about it, we really couldn’t even get back to the previous state and our moods stayed elevated because we inadvertently created a powerful metaphor about encountering challenges on “the road of life.”

The lesson is…we’re all going to go through experiences that are “less than ideal” and sometimes the “road ahead” is not going to look so good. Just remember that you can always find what’s wrong in a situation but if you focus on that, you’ll just get more of what’s wrong. That’s because where focus goes, energy flows. Instead, try changing your state by using a little well-placed humor to lighten the mood as long as you’re aligning WITH your partner rather than making a wise-crack at their expense. NOTE: That is a VERY important distinction. You could also totally change your perspective or even look for an empowering metaphor just as I did in the example I shared.

Now by sharing these tips and wrapping it in a story, hopefully I’ve also created a lesson that “sticks” in your mind, well…kind of like bug guts on a windshield. 😉 And as long as we’re talking about shifting context here, it’s pretty obvious that the challenges we were facing were nothing compared to the one that ruined a certain bug’s day and turned him into a stain on our windshield. I believe there’s a country song with a lyric that says “sometimes you’re the windshield…and sometimes you’re the bug.” Clearly, it’s better to be the windshield. It was good as new when we squeegee’d it off at the next petrol stop.

Here’s an even better way to use this

The next time you have a challenging episode, you could also try one of Katrina’s tips that is VERY powerful. It’s so powerful, in fact, that it got my attention and honestly, it became one of the biggest reasons I fell in love with her. No exaggeration. (And those of you who know us are aware that our story was definitely not “love at first sight”).

Katrina had developed this beautiful habit that I really came to appreciate. She actually created a little bit of a ‘verbal tic’ if you will. She would often start a sentence with, “You know what’s great about that?” – and then she would answer it and find a really cool turnaround on a situation that was empowering and positive. In a pretty short time, I realized that, on occasion, when she would say that…she really didn’t know what she was going to say next – but she always came up with something good. In other words, she literally conditioned herself to find the empowering meaning, no matter what…just by routinely asking that simple question. Now THAT is a rare and beautiful attribute to bring to the table in a relationship. It might even be a key practice in developing your own Legendary Love For Life. Give it a try and then write to tell me how it changes your world. Once you do, you’ll know exactly why Wayne Dyer once said, “change the way you look at things and the things you look at change.”