Are you ready to learn your lesson? 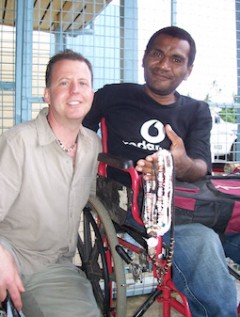 WARNING: This Could Be A Total Game-Changer!

Here’s a provocative question: If I could show you how to make your life better every time you used a bathroom, would you be interested? Now before you think I’m being inappropriate, I’m talking about a totally different kind of “bathroom habit.” Let me explain:

It all started in Fiji…

I could explain this best by sharing the story of how I used this “assignment” to change my own life. Back in 2007, I had the good fortune to attend Tony Robbins’ excellent Life Mastery program in his private resort in Fiji. It was a huge stretch for me at the time because I still had a pre-teen daughter living with me at the time and I had never been farther than Mexico or Canada back then. It literally WAS a world away back then but today as I look back, that trip was one of the first times I accomplished something extraordinary by having the audacity to set a goal that was anything but ordinary. When I consider the fact that I now LIVE in Australia – not far from Fiji – it goes to show just how far a little boundary-busting can take you when you focus on possibilities rather than limitations!

Back to the story…

As I was leaving the island, several artists and craftsmen from the local village came out to display their work at the landing strip where the private planes transported us back to the main airport. One of those craftsmen was a man in a wheelchair who made jewelry from seashells he polished and mounted. While chatting with him, he told me he ended up paralyzed after a fall from a coconut tree. After battling depression, he started making his jewelry in order to help support his family. I had initially declined to buy a necklace because I told myself and him “I’m not a jewelry guy.” However, after hearing his story, I was moved by his finding a new purpose so I wanted to donate the $20 he was charging. I knew I wouldn’t miss the money and he surely needed it more than me. However, his pride wouldn’t allow him to accept my donation and he picked a necklace and insisted I take it.

Moments after I thanked him and put on the necklace, one of the women on the island with me gave me a big beaming compliment on how much she loved my new purchase. As she told me how great it looked on me in front of a half dozen people, my old story about the fact that “I’m not a jewelry guy” kind of disappeared. 😉 As I relayed the story, I told her that my new necklace was a powerful reminder that “it’s not about me” because as I was growing my relatively new coaching business, I really wanted to emphasize service & contribution to others.

In NLP terms, one definition of an “anchor” is a powerful trigger or stimulus that evokes emotion through association. For me, that necklace became a powerful anchor that reinforced a belief and a state that literally and viscerally changed my life. From the moment I bought that necklace, I wore it every single day as a simple but profound reminder that “it’s not about me.” I let go of worrying what other people thought of me and designed a life where I focused on simply loving and serving others. Every time I touched that necklace…washed my hands… shaved…or looked in a mirror, I got an instant reminder that “it’s not about me” that left me with a smile on my face. As you might expect, after a year or more of wearing that necklace, I had what you might call a “breakthough.” That’s right. By the time wear and tear took its toll on my necklace, my gratitude was so engrained in me, I didn’t need that necklace any more…but I replaced it with a new one anyway JUST BECAUSE I LOVED THE WAY IT FELT every time I fired off feelings of immense gratitude.

So what does this have to do with you?

Well I’m glad you asked. If setting an anchor around a piece of jewelry worked so well for me and it changed my life forever…just imagine what it could do FOR YOU. I have given this assignment to clients a few times over the years and let’s just say that it’s one of those assignments that gets far less resistance…and far higher compliance. Imagine a coach giving you permission to make a nice discretionary purchase under the guise of “doing your homework”…that’s just one more reason why my clients love me so much. 😉 Let me show you how powerfully this works:

• One of my clients was a little on the shy side but she loved whimsical wristwatches so she found one that just made her smile every time she looked at it. Today she smiles all the time…and at the same time…she is far more welcoming, confident and comfortable in social interactions. THAT has led to more comfort, more social interactions…and more DATES!

• One of my clients needed to learn to love herself before she could ever expect a man to do it and after a few months, that diamond ring she gave herself helped do the trick very nicely.

• One of my clients used a motherhood ring she already had with her children’s birthstones to reconnect with the hope and promise she felt when they were little but had gotten strained as they navigated their teen years. By reconnecting to her more pure maternal instincts, she helped transform her relationship with her kids. I helped her let go of the illusion of “control” and opt instead for empowered influence. Her kids didn’t really notice the ring…but they definitely noticed how she was lightening up and nagging less!

How can you use this?

So I’m curious…now that I’ve explained how it works…how could YOU use this anchoring assignment to introduce or reinforce in a new, more empowered state that could serve you and others? Send me a note or share in the comments how this could serve you…